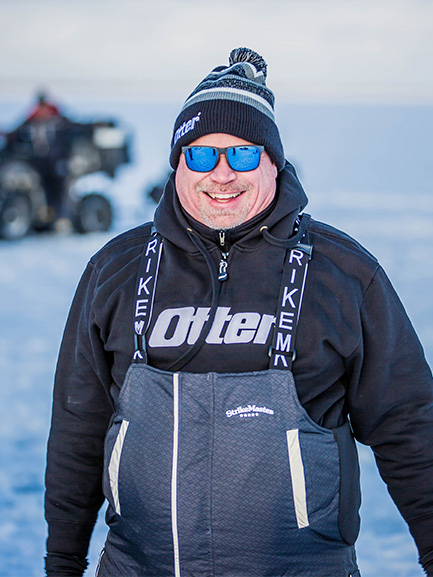 Born and raised in the southeastern part of South Dakota, Steve developed his fishing skills as a youth along the shores of the Missouri river.  There you would find him catching anything that swam the “Big Muddy”.

Even with the given abundance of open-water fishing, hunting and outdoor activities in South Dakota, his true passion for the outdoors lies under the hardwater.  Steve is a self-described “Icehead”, virtually living on the ice in the winter.  While he enjoys testing out and pushing the limits of the latest in ice gear or refining a new technique, the Otter brand of shelters have been a staple in his ice-arsenal since 1997.

Steve first began honing his ice fishing skills chasing Walleyes and Perch on the big waters of Lake Thompson.  While South Dakota may be known for its monster Perch, there are no fish species safe from his sticks.  As a multi-species angler, you’ll find Steve chasing everything from Walleyes and Perch in the prairie potholes, to Smallmouth Bass, Crappie and Bluegill on the glacial lakes as well as Lakers and Rainbows in the Black Hills.