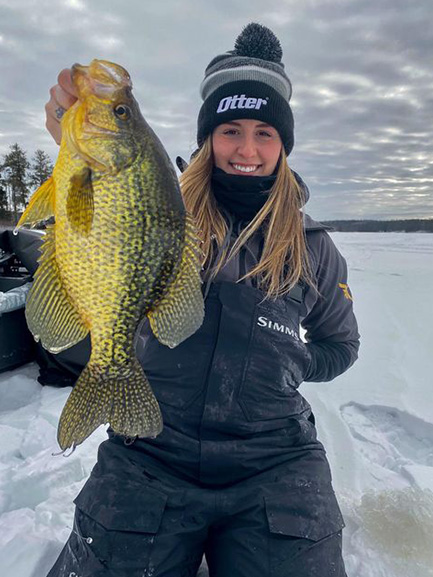 Born and raised in a small town in Northwestern Ontario, Jessie embraced her passion for the outdoors at very young age. Jessie spent the majority of her childhood in her 14’ skiff with a 6hp outboard chasing down just about anything that would bite! As she grew older, her passion for fishing turned into a career when her family purchased the resort Cedar Island Lodge on Pipestone Lake, ON; making the lakes that she resides on, her year-round home. As a part-time guide for the resort, and an avid angler herself, Jessie has grown a platform on social media that she now uses to inspire other anglers to live passionately and most importantly, FISH MORE! Jessie has grown to love the thrill of chasing muskies, but during the hard water season, she has one thing on her mind and that’s a squealing drag from a big ol’ Lake Trout! However, Jessie has made it her life-long passion to put her ice-fishing knowledge to use as she ventures to many different lakes targeting a variety of species including, walleyes and crappies. As she continues to grow as an angler in the fishing industry, she hopes to introduce more female anglers to the sport and be a part of the educational side of the fishing industry.